The Difference between a Prophet and "a Prophet" 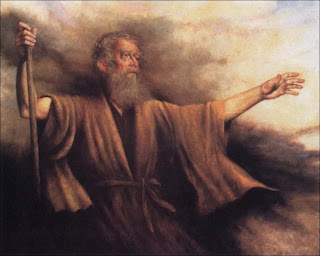 In my last post, I explained how I recently had the opportunity to sit down with a pair of Jehovah’s Witness missionaries at my home. It’s been four weeks since they last visited and subsequently left a DVD about the history of their Church and the life of Charles Taze Russell, the founder and first leader of their church. I was honestly looking forward to discussing the DVD with them and furthering our discussion about priesthood authority. But it now is beginning to look like I inherited a free Jehovah’s Witness DVD.

One thing that I didn’t include in my last post is that I also discussed with these missionaries the importance of prophets and their role in God’s plan. The Jehovah’s Witnesses generally do not regard Charles Russell as a prophet, per se, but more as a man inspired by God. I fully agree with their assessment and believe many individuals throughout history have been inspired of God to do many wonderful things. For instantce, Reformers like Luther, Wesley, and Tyndale were certainly inspired of God to do what they did. But I don’t believe they were prophets in the strictest sense of the word (e.g., someone called by God to lead his people). They were, nevertheless, prophets in a more loose interpretation of the word (e.g., someone inspired of God). The Bible provides a vivid example of the differences between a prophet and “a prophet,” and the following is how I explained this to my missionary friends.

During the exodus, Moses became extremely frustrated with the Israelites and their constant murmuring. The complaining was also a source of frustration for the Lord (Num. 11:10-15) who allowed Moses to call 70 Israelite elders upon whom an increased portion of the Spirit was given so that they prophesied and served as a sign of God’s power to assist Moses (Num. 11:24-30).

Of these 70 elders, Eldad (Hebrew: “God is/has love”) and Medad (Hebrew: “God’s loving arms reaching out”) proceeded to prophesy not just in the Tabernacle, but also in the Camp of Israel. Upon hearing this, Joshua protested saying, “My lord Moses, forbid them” (Num. 11:28). Moses responded with one of my favorite scriptures, “Enviest thou for my sake? would God that all the Lord’s people were prophets, and that the Lord would put his spirit upon them!” (Num. 11:29). In other words, Moses understood that all members of the Church can be prophets simply by receipt of the gift of prophecy.

And yet, having a testimony of Christ does not by itself qualify an individual to speak on behalf of the Lord, as was the case with Moses in the prophetic office. This distinction was apparently not fully understood by Moses’ older siblings, Miriam and Aaron, who exhibited pride and jealousy in view of Moses’ unique calling: “Hath the Lord indeed spoken only by Moses? hath he not spoken also by us?"(Num. 12:2). The Lord responded by explaining the difference between a prophet and “a prophet.”

He called Moses, Aaron, and Miriam to the tabernacle and proceeded to describe the first category of prophet: “If there be a prophet among you, I the Lord will make myself known unto him in a vision, and will speak unto him in a dream” (Num. 12:6). In other words, the first type of prophet is provided with direct revelation from the Lord through his Spirit. This is the same type described in Revelation 19:10, and the type which most true followers of the Christ qualify as.

The Lord continued, however, by explaining that Moses was not this type of prophet: “My servant Moses is not so, who is faithful in all mine house. With him will I speak mouth to mouth, even apparently, and not in dark speeches; and the similitude of the Lord shall he behold” (Num. 12:7-8). The category of prophet that Moses belonged to included one on one interaction with the Lord himself, where the individual is able to behold and speak with the Lord on a personal basis. This is the Lord’s spokesperson through whom timely instruction is given to the Lord’s people. Through this direct interaction with the Lord, this type of prophet receives all the keys necessary for the salvation and exaltation of God’s children.

I’m not sure if this distinction between prophets sunk in with the Jehovah’s Witness missionaries, but it gave me the opportunity to testify that Joseph Smith was a prophet in the strict sense of the word, someone called of God to lead His people today, and that his successor today is Thomas S. Monson. The Spirit was present during our conversation and I trust they felt it also. Maybe that’s why they haven’t been back to see me in a month...
Posted by Jeremy at 6/20/2011

I had a wonderful discussion with some Jehovah's witnesses for about an hour. Consequently,my 16 year old son came and listened.A few days later, he came to me with a book of Mormon and asked how he could prove our stuff was true. I told him to read it and learn the doctrine and the Spirit would tell him what to say. It has helped him gain a knowledge of our beliefs and given him the confidence to dear his testimony. I am glad they stopped by, it was a stepping stone for him, in building his own testimony. I hope they come back to see you, maybe they will learn something.

Thanks for the comment, Linda. Your son's experience is typical of most members of the Church. As Latter-day Saints, we don't really realize what we actually believe or know until we are challenged in our beliefs.

I found that out shortly after entering the mission field when I was challenged by those of other faiths. It put me in a situation to either search out the truth and know for myself or force myself to ignore that feeling that maybe what I was teaching or following wasn't all true.

What I fear, however, are the many "devout" members of the Church who refuse to get out of their religious comfort zone and challenge their own beliefs.

Good post Jer. I have always thought of this as the difference between prophecy and an actual "prophet, seer and revelator."

It makes sense that there should be a difference. There are many spiritual gifts, and God wants us to attain them all. Many of these come and go based on our own diligence. But this cannot happen at the expense of keeping order, too many people would get lost on the way.

Not sure that my entire thought is coming across...but oh well. Thanks for the stoking the thoughts.

Hi there. My name is Angel. I don't really know you, but I came across your blog, and read this post about the difference between a prophet, and "The Prophet". I would have discarded the opportunity, but I felt to share a couple of thoughts.

I understand you will probably disagree with me, which I'm ok with. I don't seek to be agreeable with from anybody, but just to share what I believe, and then people can decide for themselves, through the spirit, if what I share is true or not. I'm LDS by the way, so I'm not against your religion, or anything like that, I just have a different view. Anyways, let's go ahead.

First of all, I agree with you that any member of the Church can be a prophet, and not only we can be but we ought to, as you quoted Moses: “Enviest thou for my sake? would God that all the Lord’s people were prophets, and that the Lord would put his spirit upon them!”

However, your definition of a prophet, or the Spirit of prophecy I don't agree with, when you said: "Accordingly, anyone who can testify that they know Jesus to be the Christ is technically a prophet since the spirit of prophecy is made manifest through a valid testimony of the Savior".

The problem comes when we try to define "The Testimony of Jesus". You don't give "the testimony of Jesus", you have to receive it. "The Testimony of Jesus" is the testimony that He gives to you to tell you that you are redeemed from the fall, in other words, when you receive your calling and election, or in other words, the Second Comforter. When this happens (and it can happen and should happen to everyone if the process is followed D&C 93:1), then the person receives (not gives) the Testimony of Jesus, and then that person can be called a prophet. The Lord says as you also quoted: “If there be a prophet among you, I the Lord will make myself known unto him in a vision...". The person has to see the Lord in vision, the same way Joseph first vision.

Now, there is a difference between being a prophet, which is being redeemed and promised eternal life while in the flesh, and the specific calling to lead the Lord's people, as happened with Moses. That's the distinction the Lord wanted to make. Also, we have to take into account, that the Lord wanted the whole people of Israel to receive what Moses had received and they rejected it, they rejected the fullness of the gospel, and therefore, from then on, they had to conform to a smaller part of the gospel (unless of course any person would do the works of Moses, then the Lord is obliged to do the same as with him).

Anyways, I just wanted to point out that we all should search to become prophets by receiving the Second Comforter. We ought to be taught by angels to prepare for this, otherwise, our faith is proven to not be enough (Moroni 7:37 and the whole chapter also). Also, it is possible to be lead by false prophets, so we should always inquire of the Lord about the ones leading us. Ask and ye shall receive...

Jesus is the son of God. He is part of the triad Father Son and Holy Ghost. He is not a prophet but came as a teacher of love and forgiveness. This is why praying or believing in prophets creates a problem because prophets are below
Jesus/God. Jesus could teach prophets and he would never teach killing.
Any prophet that teaches killing is not a prophet of God.