Back to the Basics? Our New/Old Gospel Principles Manual 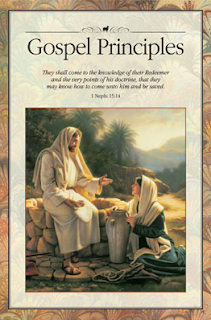 But the real question is: why would the leaders of the Church utilize this lesson book in this setting? I have a couple of theories, neither of which reflect well on the general membership of the Church... so hopefully there is an alternative theory that one of you are thinking.

A few posts back Jeremy discussed 2 Ne 9:48 which states "Behold, if ye were holy I would speak unto you of holiness; but as ye are not holy, and ye look upon me as a teacher, it must needs be expedient that I teach you the consequences of sin." Granted, the material in the Gospel Essentials manual certainly consitutes things of "holiness." However, is it possible that our Church leaders are looking upon the Church as a whole and making a judgment that the general membership needs to revert back to the basics? Could this decision be tied to the general spiritual state of the Church membership? Are we predominantly not prepared to receive higher, or holy, doctrine through our Sunday School manuals?

Along the same lines, in February I posted about my own perceived differences in the doctrine taught in Gospel Essentials class versus doctrine taught in the regular Sunday School classes. Our discussion seemed to conclude that there are a great deal of cultural expectations or teachings that seem to infect the actual doctrine of the Church. Are the bretheren perceiving similar occurrences?

Joseph Smith stated that for the Saints "I teach them correct principles, and let them govern themselves." (“The Organization of the Church,” Millennial Star, Nov. 15, 1851, 339). I believe that the general membership of the Church could use more of this concept in our lives. I have found that learning principles, and then determining by means of personal revelation how I am to apply those principles in my life is probably the most effective way to progress, commit to living a teaching, etc.

So what do you think? Was it some or all of the above, or something different which has inspired this change. Either way it will be an interesting year and I look forward to going back to the basics.
Posted by Nate at 12/23/2009 6 comments:

Is There a Right/Wrong Way to Perform a Baby Blessing? 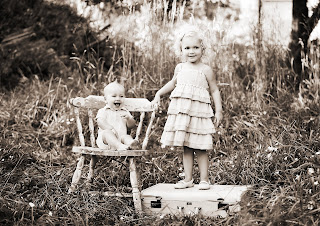 Technically, the naming and blessing of an infant is nothing more than a father’s blessing, a blessing that a father has the right to give any and all of his children at any time – not just when they are infants. At its core, it is not an ordinance of salvation. It will not make an ounce of difference in the salvation of the child if this ordinance is not performed, even if it is not performed correctly.

Because it’s not a saving ordinance, guidance from the Church on how the ordinance is to be performed is quite scarce. As a result, this has led to many traditions that may or may not be in tune with the purpose of the ordinance. Since the Church is silent on these traditions, I guess we have to be the judges for ourselves.

In a revelation concerning the government of the Church, the Prophet Joseph Smith received the following instructions on this ordinance: "Every member of the Church of Christ having children is to bring them unto the elders before the church, who are to lay their hands upon them in the name of Jesus Christ, and bless them in his name" (D&C 20:70) (emphasis added). What does it mean to “bring [the child] unto the elders before the church”? Some perform this ordinance at home with their family. Does this count as “before the church”? What if a member of the Bishopric is present as a representative of “the elders”? What if a Bishopric member is not there, but it is nonetheless performed under the direction of the Bishopric?

The Priesthood Handbook of Instructions teaches that “[c]hildren normally should be named and blessed during fast and testimony meeting in the ward where the parents are members of record.” Thus, although not a strict regulation, parents have at least been encouraged to name and bless their children at their home ward on fast Sunday.

One reason to do this may be for the benefit of the parents, and not the child. For example, John Taylor taught that “by bringing their child before the Church [the parents] manifest their faith in the sight of their brethren and sisters, in God's word and in his promises, as well as their thankfulness to him for increasing their posterity and for the safe delivery of his handmaiden.” Thus, blessing the child before the congregation may comprise a miniature test of faith for the parents. President Taylor continued, “The child is also benefited by the united faith and responsive prayers of the assembled Saints . . .” [Messages of the First Presidency of The Church of Jesus Christ of Latter-day Saints (Salt Lake City: Bookcraft, 1965-75), 2:311]. The combined faith principle in favor of another is similarly involved in the blessing of the sick. See James 5:14-15.

As most active priesthood holders know, the fixed portions of the ordinance are 1) addressing Heavenly Father, 2) invoking the authority of the Melchizedek Priesthood, 3) giving the child its name, and 4) closing in the name of Jesus Christ. At its core, then, this ordinance is simply a prayer where the person giving the blessing speaks directly with our Heavenly Father. So, what happens if he fails to address Heavenly Father at the outset? This happened a few months ago in my home ward in two separate blessings – one of which was given by our Elder’s Quorum President. Does the Bishop stop the ordinance and request that it be correctly redone? What if the Melchizedek Priesthood is not mentioned nor invoked?

There is also an unfixed portion where the person giving the blessing generally adds words of blessing as the Spirit dictates. This is where the ordinance gets fairly nebulous. Because this is simply a prayer, does he ask Heavenly Father to bless the child in the form of a prayer or does the person giving the blessing personally invoke the blessings upon the child? In other words, does he say “we bless you…” or “we ask thee to bless this child…”? I have seen it done both ways. It may just be me, but to me it sounds odd to hear the ordinance start out like a prayer, and then subsequently hear the person giving the blessing begin to pronounce blessings upon the child. Is there a right way or a wrong way to do this? In preparation of blessing my first child, I asked this question to two temple presidents at two different temples and received two separate responses.

For me, I keep in perspective the fact that the blessing has no bearing on the salvation of my children. In reality, if I didn’t like the way it turned out before the congregation, there is absolutely nothing stopping me from re-doing it at home later that day. When I blessed my two children, I personally kept a tone of prayer throughout the blessing. I petitioned Heavenly Father to bestow blessings upon my children as I felt was needed or essential through the Spirit. Was I right? Who knows? But it felt right to me…

Marijuana and the Word of Wisdom 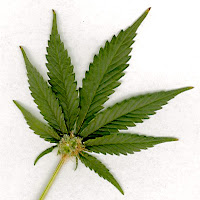 Here's a hypothetical that I was thinking about when driving to work last work. Right now, smoking marijuana is against the Word of Wisdom. However, in states like California, using and selling marijuana is legal for medicinal purposes when prescribed by a doctor. If a member lives in California and is prescribed medical marijuana, or the federal government legalizes it in the future under similar circumstances, would that member be violating the Word of Wisdom?

If you think it would be ok, it seems funny that the government becomes a de facto interpreter of the Word of Wisdom. I'm not really sure what to make of that.
Posted by Evgenii at 12/13/2009 29 comments: