Using the "Priesthood" to Cast Out Homosexuality? 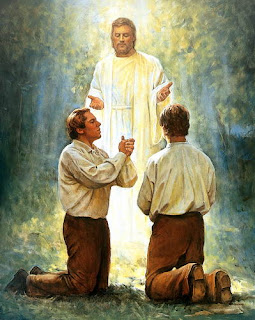 Breitbart reported today that a non-LDS church (thank-you Serendipity) in Connecticut posted a video to YouTube showing an attempt to cast homosexuality out of a 16 (or possibly 18) year old male. Does this seem odd to anyone else?

Now, I admit upfront that I do not understand the underpinnings to homosexuality. I don't think anyone "knows" for certain whether homosexuality is something you are born with or that it can be "acquired" somehow through societal elements, nor do I think it matters in this case. The issue here, in my opinion, is how Christ would have us use His priesthood.
Attempting to cast out homosexuality by means of the priesthood seems akin to using the priesthood to root out sin from an individual instead of helping that individual acheive the required change of heart. If Christ wanted it this way, why did He continually exhort His followers to "Go and sin no more"? He could have just cast out the evil adultery spirits from the woman, or cast out the evil hardened heart of the Pharisees.
Removing sin and/or faults from our lives is not as easy as calling the Elders of the Church and having them lay hands upon us. Repentance is a gift! Although difficult, and sometimes long, the repentance process refines us and makes us better. Without repentance, we would never be able to correctly channel the Atonement into our lives, whithout which, exaltation would be impossible.
In a situation like the one reported in Breitbart, to what extent can the Lord's priesthood bless the lives of others? Is the priesthood supposed to be used to tie the hands of the adversary? If not, then what is the point of dedicating a home by the power of the priesthood?
Posted by Jeremy at 6/24/2009 9 comments:

I stumbled by this video on LDS.org today while I was preparing a lesson. It is a story of a simple person that is a clear example of what all men should be striving to be.
Apparently, the church has its own youtube channel where it puts out short, decently well-produced vidoes (see the website here). I thought I'd point it out to everyone because I found this (and some of the other videos on this site) to be a video that I could easily share with some of my non-mormon friends.
I am a father of 2 children. I hope they can someday speak of me how the daughter of this video speaks of her father. I lost my dad more than 8 years ago. He was an amazing example in many ways. He had many faults, but the amazing part is that he knew them all. This made him humble, non-judgmental, and very forgiving. As a result of his example I feel that I have gained, at least in part, some of these attributes.
I try to imagine what this world would be like if there were better fathers. It is no coincidence that in almost every preisthood session of general conference there is some sort of a "be a man" talk. In fact, I can think of nothing that would have a greater impact on this world for good. We all have the chance to create and mold such men, whether it be by raising our sons, participating in youth/cub scouts/and boy scout activities, or by raising our daughters to expect men to act as such. Hopefully we can think of these responsibilities with an added measure of purpose.
And if we find such men in our lives, let us take the time to thank them--because we all know it isn't easy.
Posted by Nate at 6/21/2009 2 comments: 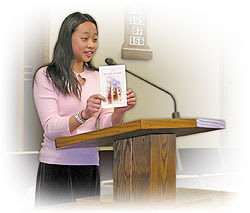 I just read about an incredible idea on how we may revolutionize our weekly Sacrament meetings. The idea was presented here by Sixteen Small Stones, and is followed by a fantastic analysis on how it could work and its potential ramifications.

In short, the idea involves issuing a few invitations to each sacrament meeting speaker which may be passed out to the speaker's non-member friends, co-workers, neighbors, etc. In essence, it is a less-intrusive way to introduce your acquaintances to the Church. As the article states:
"Real or imagined, inviting someone to church feels awkward. It often doesn’t feel socially comfortable or even appropriate to invite someone to church without an antecedent that indicates some kind of existing interest or disposition. So we wait around forever for the topic to come up and the right opportunity to make the leap.
"But inviting people to come to hear you speak in church is different. It’s about you, not just the church. It’s like inviting people to come hear your band play, or attend a baby shower or your daughter’s dance recital, or to come to a barbecue at your house. There is no reason to wait for conversational queues that might indicate interest or disposition. If they can’t make it or aren’t interested that’s fine."
In my opinion, this is a great way to increase the member-missionary efforts throughout the Church. I, for one, am going to pitch this idea to our Bishopric.
Posted by Jeremy at 6/12/2009 5 comments:

“The Most Correct of ANY Book on Earth”? 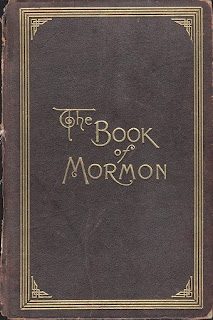 In 1842, Joseph Smith wrote a letter to John Wentworth, the editor of the Chicago Democrat, who was asked by an acquaintance, George Barstow, for information about the Saints. Barstow was writing a history of New Hampshire and wanted to include information about the Mormons. In response, the Prophet sent Mr. Wentworth a very brief history including thirteen statements of belief, what we today know as the thirteen Articles of Faith.

Do we believe that the Book of Mormon is inerrant? It is no secret that there have been numerous changes to the text of the Book of Mormon between the 1830 edition and modern LDS editions; almost four thousand changes according to the Tanners, Salt Lake City-based Mormon critics.

Sadly, many uninformed LDS do make the inerrancy assumption and back it up with a typically misconstrued passage in the Introduction to the Book of Mormon:

“Concerning this record the Prophet Joseph Smith said: ‘I told the brethren that the Book of Mormon was the most correct of any book on earth, and the keystone of our religion, and a man would get nearer to God by abiding by its precepts, than by any other book.’” (emphasis added)

The term “correct” in this instance, however, does not necessarily mean perfect. In fact, in 1841 when Joseph uttered these words, the word “correct” meant “set right, made straight,” or “conformable to truth, or conformable to a just standard.” In accordance with this definition, the Book of Mormon indeed is correct.

What is more, the book itself repeatedly feigns inerrancy. Moroni himself acknowledged that “if there are faults they are the mistakes of men” (Book of Mormon, Title Page; see also Mormon 8:17). Similarly, the Brief Explanation about the Book of Mormon includes the following statement:

“About this edition: Some minor errors in the text have been perpetuated in past editions of the Book of Mormon. This edition contains corrections that seem appropriate to bring the material into conformity with prepublication manuscripts and early editions edited by the Prophet Joseph Smith.”

[Now, be honest, did you know this statement was in the Book of Mormon before now? I actually just read that for the first time last week, and I deem myself fairly well-read in the scriptures.]

In other words, the same text-critical concerns that LDS have with the Bible certainly exist with the various Book of Mormon manuscripts. Scripture, including the Book of Mormon, is recorded by fallible men who can and do make mistakes. Therefore, the possibility of mistranslation or misinterpretation of Hebrew and Greek (or reformed Egyptian, for that matter) exists. Undoubtedly, however, the Book of Mormon is much less textually uncertain than the Bible as a result of the shorter and simpler transmission history. Nonetheless, I don’t think anyone can authoritatively state that we believe either text is free from verbal inerrancy in their present form.

What is more, a closer reading of the Prophet’s statement reveals his stress on the “precepts” of the book, and therefore his inference to the correctness of the book’s doctrinal content, not the book itself. Read in this view, the Book of Mormon certainly is correct in the doctrines and principles it teaches, however, it does not claim to contain all truth. Although it may constitute “the most correct of any book on earth,” according to this interpretation, it unmistakably is not comprehensive in its truth.
Posted by Jeremy at 6/07/2009 6 comments: