Shaking the Dust from your Feet 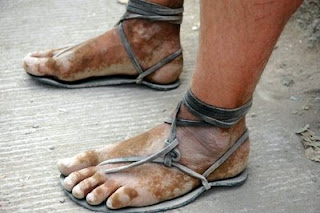 On my mission, I fortunately picked up the Spanish language fairly quickly. In fact, within about 2 months in the field I was fairly conversational and had acquired an accent that made some inquire as to whether I was Ecuadorian. Other missionaries can pass through the entirety of their mission without really grasping a foreign language; and such was the case with one of my companions. Even though I was only in the field about 2 months, and my companion had less than 3 months left on his mission, I clearly had a better understanding of the Spanish language. I honestly felt bad and knew it had to be tough for him to be a senior companion and have his junior companion lead discussions.

On one occasion we were engaged in a discussion with a large family. After each time my companion spoke, the family looked to me and asked me to interpret what he had just said. This clearly offended my companion who at one point refused to let me explain what he had just taught and insisted that it was clear enough. He became so infuriated that as we left the family’s home he actually began to dust off his shoes a short distance down the street as a testimony against the inhabitants of the home. I didn’t have the heart to tell him that he likely didn’t understand how that ordinance worked.

The following is a summary of dusting one's feet as a testimony against others, as I understand it.

There are two priesthood ordinances involving the feet; one involving the washing of the feet as described in John 13 and D&C 88:139, and the other involving shaking off the dust from the feet. The former being an ordinance of blessing, the latter an ordinance of cursing. As an ordinance, consequently, neither is to be performed except through the Lord’s duly appointed and authorized servants.

Shaking off the dust from the feet is an action of disapproval and condemnation. To Joseph Smith and Oliver Cowdery, the Lord commanded that “in whatsoever place ye shall enter, and they receive you not in my name, ye shall leave a cursing instead of a blessing, by casting off the dust of your feet against them as a testimony, and cleansing your feet by the wayside” (D&C 24:15). However, not just anyone can undertake this ordinance, and the authority to do so has not been given to missionaries generally. Elder McConkie stated that “[n]o curse should ever be decreed except by direct revelation from the Lord commanding such to be done” (Elder Bruce R. McConkie, Doctrinal New Testament Commentary, 2:123). This is probably because testifying against anyone is a frightening responsibility which mortals cannot fully comprehend without the guidance of the Spirit.

“To ceremonially shake the dust from one's feet as a testimony against another was understood by the Jews to symbolize a cessation of fellowship and a renunciation of all responsibility for consequences that might follow. It became an ordinance of accusation and testimony by the Lord's instructions to His apostles as cited in the text [of the New Testament]. In the current dispensation, the Lord has similarly directed His authorized servants to so testify against those who wilfully and maliciously oppose the truth when authoritatively presented. The responsibility of testifying before the Lord by this accusing symbol is so great that the means may be employed only under unusual and extreme conditions, as the Spirit of the Lord may direct” (Elder James E. Talmadge, Jesus the Christ, p.345)(emphasis added).

Interestingly, the Lord cautions those performing this ordinance that it should not to be done in the presence of those they are testifying against “lest thou provoke them, but in secret: and wash thy feet, as a testimony against them in the day of judgment” (D&C 60:15). The Prophet’s brother, Samuel Smith, performed this ordinance at least once while preaching the gospel, as reported by the Prophet’s mother:

“On the 30th of June, Samuel started on the mission to which he had been set apart by Joseph, and in traveling 25 miles, which was his first day’s journey, he stopped at a number of places in order to sell his books, but was turned out of doors as soon as he declared his principles. When evening came on, he was faint and almost discouraged, but coming to an inn, which was surrounded with every appearance of plenty, he called to see if the landlord would buy one of his books. On going in, Samuel inquired of him, if he did not wish to purchase a history of the origin of the Indians.

“‘I do not know,’ replied the host; ‘how did you get hold of it?’ ‘It was translated,’ rejoined Samuel, ‘by my brother, from some gold plates that he found buried in the earth.’ ‘You liar!’ cried the landlord. ‘Get out of my house-you shan’t stay one minute with your books.’

“Samuel was sick at heart, for this was the 5th time he had been turned out of doors that day. He left the house and traveled a short distance and washed his feet in a small brook, as a testimony against the man. He then proceeded five miles further on his journey, and seeing an apple tree a short distance from the road, he concluded to pass the night under it; and here he lay all night upon the cold, damp ground. In the morning, he arose from his comfortless bed, and observing a small cottage at no great distance, he drew near, hoping to get a little refreshment…. He…proceeded to Bloomington, which was 8 miles further.
“Here he stopped at the house of John P. Greene, who was a Methodist preacher and was at that time about starting on a preaching mission. He, like the others, did not wish to make a purchase of what he considered at that time to be a nonsensical fable; however, he said that he would take a subscription paper, and if he found anyone on his route who was disposed to purchase, he would take his name, and in two weeks Samuel might call again and he would let him know what the prospect was of selling. After making this arrangement, Samuel left one of his books with him, and returned home. At the time appointed, Samuel started again for the Reverend John P. Greene’s, in order to learn the success which this gentleman had met with in finding sale for the Book of Mormon. This time, Mr. Smith and myself accompanied him, and it was our intention to have passed near the tavern where Samuel was so abusively treated a fortnight previous, but just before we came to the house, a sign of smallpox intercepted us. We turned aside, and meeting a citizen of the place, we inquired of him, to what extent this disease prevailed. He answered that the tavern keeper and two of his family had died with it not long since, but he did not know that anyone else had caught the disease, and that it was brought into the neighborhood by a traveler who stopped at the tavern overnight” (Lucy Mack Smith, History of Joseph Smith, pp.225-226) (emphasis added).
Posted by Jeremy at 7/06/2010

Interesting post Jeremy. I don't think I could ever presume to do something like this...not until I felt I was a perfect messenger.

And after that story...I really don't think I could.

I'd sooner put more dirt on my feet so I could testify as to what I should have done differently.

Admittedly, I was shocked when my companion attempted to do it while in the mission. Although I didn't have a clear understanding of what it meant, I was of your mindset and believed it wasn't something we as missionaries were supposed to be doing without direction.

I like your "more dirt" statement - we should all feel that way.

Hey guys sorry to post something so off topic.

There is an interfaith discussion between Mormons and a Christian pastor in Denton in August, and it appears that it will be in the format of a stake fireside. A ward mission leader wrote to us at FAIR and asked if anybody could attend because his hunch is that the pastor will turn it into a debate, and that the Mormon representatives will not be prepared for that.

FAIR doesn't really have anyone that can attend. Please contact me for more details if you are interested.

What is the date of that discussion?

In The Doghouse said...

Having an ancestor who had this ordinance performed on them, I am always interested in research on this topic.

My GGG Grandfather had "run the Mormon missionaries off of his farm with a gun, because the Mormon's killed his baby sister." (She was unfortunately a casualty of the Mountain Meadow Massacre incident.)

He records that the Mormons "shook the dust from their feet" at him.

Thankfully, the Lord has a bigger perspective than man and will not uphold an unrighteous act by a priesthood leader.

My family joined the Church several years later thanks to another set of missionaries who faithfully fulfilled their calling from the Lord.