Why Did Jesus Anoint with Spittle and Clay to Heal a Blind Man? 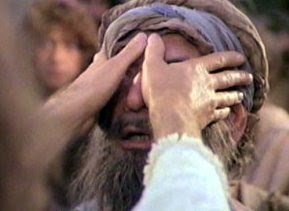 While serving a mission in Ecuador, I was privileged to witness the healing of an elderly woman stricken with rheumatoid arthritis. She hadn’t been able to leave her bed for over six months. After having anointing her with consecrated oil, the local Elder’s Quorum President laid his hands upon her head and uttered a simple, but faith-filled sealing of the anointing. Later that evening, my companion and I saw her in a downtown park with her grandchildren, where she described to us how she literally felt the malady drain out of her body through her feet.

As Latter-day Saints, we follow James’ teachings on giving blessings: “Is any sick among you? let him call for the elders of the church; and let them pray over him, anointing him with oil in the name of the Lord: And the prayer of faith shall save the sick” (James 5:14-15). Consequently, James teaches a two-part ordinance; first anointing the afflicted with consecrated oil, and second sealing that anointing with a prayer of faith.

Knowing this procedure, it has always baffled me why the Savior would use spit and dirt to heal a man blinded from birth, as described in John 9. In another instance, Christ heals a man’s blindness at Bethsaida by simply spitting on his eyes and giving him a pair of priesthood blessings (see Mark 8:22-26).

With reference to the account in John, Jesus and his disciples encounter this man and the disciples query, “Master, who did sin, this man, or his parents, that he was born blind?” (John 9:2). This question apparently reveals the disciples’ understanding of a pre-existence. Christ answered saying, “Neither hath this man sinned, nor his parents: but that the works of God should be made manifest in him” (John 9:3). In other words, in all His omniscience, God had arranged this man’s maladies in order to demonstrate the Master Healer’s miraculous power over the physical body; over life and death. Indeed, this man was foreordained from the counsels in heaven to be blind so that Christ’s power could be made manifest therein.

[NOTE: Lazarus’ death and subsequent “resurrection” likely had the same implication. Concerning his sickness that eventually ended in his death, Jesus said, “This sickness is not unto death, but for the glory of God, that the Son of God might be glorified thereby” (John 11:4).]

“When he had thus spoken, he spat on the ground, and made clay of the spittle, and he anointed the eyes of the blind man with the clay” (John 9:6). The Savior, therefore, apparently fashions a make-shift mud pie out of some nearby dirt and his saliva, and subsequently coats the man’s eyes with it. He is then commanded to “Go, wash in the pool of Siloam” whereby he “washed, and came seeing” (John 9:7).

No consecrated oil, no laying on of hands, and apparently no prayer of faith. Yet the man was healed. So, what significance does the saliva or clay in the eyes serve for healing purposes?

I believe the Savior was teaching his disciples a much deeper lesson; one where he is typified as Jehovah, the God of the Old Testament and Creator of mankind. “For by him were all things created, that are in heaven, and that are in earth, visible and invisible, whether they be thrones, or dominions, or principalities, or powers: all things were created by him, and for him” (Col. 1:16).

In the creation account from Genesis, Moses describes the entrance of mankind as follows:

“But there went up a mist from the earth, and watered the whole face of the ground. And the Lord God formed man of the dust of the ground, and breathed into his nostrils the breath of life; and man became a living soul” (Gen. 2:6-7).

As Moses details, Jehovah symbolically used a bit of water and dust to fashion man’s body. Thoughts of a potter’s clay come to mind. Christ’s disciples were likely well aware of these verses, yet they may not have understood the symbolic nature taught therein. That is, until they saw Christ, or Jehovah in the flesh, “create” new eyes for this blind man using essentially the same props as described in Genesis.

What is just as important, I believe, is the spiritual blindness of the blind man that is concurrently remedied. When questioned by his neighbors about his miraculous healing, he first referred to Christ as “a man that is called Jesus” (John 9:11). Later, upon be interrogated by certain Pharisees, he states that “[Jesus] is a prophet” (John 9:17). Gradually, as he is repeatedly questioned and discredited by the Pharisees, his testimony grows to where he testifies that Jesus is of God (John 9:30-33). When lastly confronted by the Savior, the man exclaimed, “Lord, I believe. And he worshipped him” (John 9:38). Where he was once “spiritually” blind, he was now able to see and recognize his Lord and Savior.

Not unlike the blind man’s experience, Enoch was once commanded to “anoint thine eyes with clay, and wash them” whereby he “beheld the spirits that God had created; and he beheld also things which were not visible to the natural eye” (Moses 6:35-36). Thus, Enoch’s eyes were opened as his spiritual blindness was alleviated.

I’m not entirely sure why clay was used in Enoch’s case, but the lesson still remains. All of us have need to be cured of our spiritual blindness so that we may clearly see God’s plan.
Posted by Jeremy at 4/25/2009

Good post Jer. I've always wondered whether it was only symbolic or whether the dirt was also used to generate nerves (always assuming that something can't be made out of nothing). If you think about it...between dirt/spit, you have most raw elements necessary for a body.

He may have needed mud, but their was no water availible. It could be that simple.

Hey Jer. Great post! Very interesting. I frequent The Seer Stone and enjoy all the posts. Thanks for sharing!

I believe priesthood blessings to heal physical ailments are as much about the spiritual healing as the physical healing itself... I think you are right on target.

I think if the veil were lifted from our eyes and we could see with our eternal spiritual eyes, we'd realize that everything done here in mortality is actually based on a spiritual function or principle.

The physical healing is what we see as miraculous, but since this is simply a temporal life, it's really all about the eternal spiritual principles behind what we see - and the related spiritual growth that brings to pass the immortality and eternal life of man.

Further to Jami's comments, after James states "And the prayer of bfaith shall save the sick," he follows with "and the Lord shall raise him up; and if he have committed sins, they shall be forgiven him."

Why would receiving a priesthood blessing be tied to forgiveness of sins? Well, some commentators believe that if you have sufficient faith to be healed, you also are well-rooted in gospel principles, including repentance. Thus, it is not the priesthood blessing that effectuates a forgiveness, but the recipient's own faithfulness and repentant attitude.

Thanks for stopping by, Jami. I cetainly hope to see you more. I also invite you to browse our previous posts - some of which may be of interest to you.

Thank you for this article! I read the scripture on Enoch a few days ago and have been trying to understand the symbolism behind the clay-- so this was enlightening, and a blessing to find. A thought I had, which stemmed from your comments, is that clay represents something natural. Especially when looked at in the context you present it (that we're made from the dusts of the earth). Perhaps, in the case of the blind man as with the case of Enoch, another thing the Savior was trying to symbolize is that we must "wash" ourselves, through the atonement, of the natural man,and only then will we truly be able to see. Because we'll be able to see with spiritual eyes, instead of natural eyes.
Moses 6:35-36 says "Annoint thy eyes with clay, and wash them, and thou shalt see. And he did so.....and he beheld things which were not visible to the natural eye."
The end result is the same as with the blind man-- darkness was turned to light.
We know our eyes are made to see as we wash ourselves of the natural man and become clean through the atonement. I think the clay and the washing of the clay could also be symbolic of this-- finding eyes that see.

"...for out of dust thou art made..."
It's more than science...
We're made out of dust, so why the same dust could not heal us ?
(used by the same One who made us,
implies that no time has passed for Him, from when the first man was made, and we can't have any affliction not known to Him).
(physical death included)(!)
It shows that we are still the needy children, as in the day of Adam...(no changes). And so on...