Who Had a Urim and Thummim? 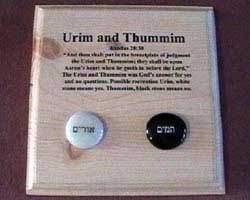 The Hebrew words urim and thummim (both plural) are typically translated by LDS scholars as “lights” and “perfections,” respectively. This seeric device is generally used for receiving revelations and translating ancient scriptural records written in tongues unknown to the translator. The scriptures are clear that the content of such records can be manifest only as the Lord wills and through his appointed prophet and seer.

As I explained in a previous and related post, the expression "Urim and Thummim" is never used in the Book of Mormon. Instead, the term was likely adopted by the Prophet during or after his translation of the Old Testament once he became familiar with the Old Testament revelatory device known to the ancients as the Urim & Thummim. In fact, the reference to the “Urim and Thummim” found in D&C 10:1 was added in the 1835 edition of the D&C. Prior to that the word “interpreters” was used, which is consistent with Book of Mormon terminology referring to the Nephite interpreters. While it isn’t technically correct, it eventually became common for members of the Church to call the Nephite interpreters the Urim & Thummim.

So, who do we know of that had a Urim & Thummim, and do any of them relate to each other?

1) “And I, Abraham, had the Urim and Thummim, which the Lord my God had given unto me, in Ur of the Chaldees” (Abr. 3:1). A Urim & Thummim was given to Abraham while he resided in Ur, and he was taught astronomy through it (Abr. 3:1-4). “And the Lord said unto me, by the Urim and Thummim, that Kolob was after the manner of the Lord” (Abr. 3:4). It’s interesting to note that, although Abraham used the Urim & Thummim to receive revelation from the Lord, he also “talked with the Lord, face to face, as one man talketh with another” (Abr. 3:11). The scriptures are silent as to what happened to Abraham’s Urim & Thummim.

Though no clear explanation has been preserved for us scripturally, the device used by Aaron likely consisted of ocular objects belonging to the ephod or vestment of the high priest. The Urim & Thummim were carried in the breastplate of judgment, which bore the names of the 12 tribes of Israel on 12 precious stones so as to be on the high priest’s heart when he went before the Lord (see Exodus 28:15-30). Through apostasy, the use of the Urim & Thummim was lost to Israel. Thus, when the Jews returned from their Babylonian captivity and they were faced with a tough question, it was agreed to postpone their answer until there should rise up “a priest with Urim and with Thummim” (Ezra 2:63).

In order to provide an interpretation for future righteous generations privileged to read his record, the Lord provided the brother of Jared with “two stones” (e.g., Nephite interpreters) that were to be sealed up with his record (Ether 3:23, 28).

4) King Mosiah I, the father of King Benjamin, translated engravings written on a large Jaredite stone “by the gift and power of God” (Omni 1:20). As understood by LDS, translating “by the gift and power of God” is synonymous with using a Urim & Thummim, or the Nephite interpreters as it were in this case (see D&C 135:3; Introduction to the Book of Mormon). The Nephite interpreters were described as “two stones which were fastened into the two rims of a bow” (Mosiah 28:13). How King Mosiah I received the stones is not readily apparent, neither is it known who put them into the rims of a bow. The interpreters eventually passed from Mosiah I to his grandson King Mosiah II, who translated the Jaredite record found by Limhi’s people (see Mosiah 8:13-14; Mosiah 28:11-15).

On the other hand, if that were the case, why didn’t these individuals also grab and deliver up the brother of Jared’s record to Mosiah I, which was specifically sealed up with the stones? Why did his record not come forward until Limhi’s people found it? Unfortunately, there is no explanation given in the scriptures. Regardless, the scriptures are clear that Mosiah II had interpreters in his possession when Limhi’s people presented him with the Jaredite record. Whether his interpreters were those had by the brother of Jared, we cannot be certain, but a reasonable argument can be made to that effect.

6) The Prophet Joseph Smith unearthed and used the brother of Jared’s Urim & Thummim to translate the Book of Mormon (D&C 17:1). The Prophet described the Urim & Thummim as “two transparent stones set in the rim of a bow fastened to a breastplate” (History of the Church, 4:537). Lucy Mack Smith was able to inspect the Urim & Thummim the morning after Joseph had obtained them from the Hill Cumorah. She stated that she “took the article in [her] hands and, examining it with no covering but a silk handkerchief, found that it consisted of two smooth three-cornered diamonds set in glass, and the glasses were set in silver bows connected with each other in much the same way that old-fashioned spectacles are made” (History of Joseph Smith, 1996, p.139).

7) The planet on which God resides is also described as being “a great Urim and Thummim,” and the earth itself in its “sanctified and immortal state,” will also be a Urim & Thummim (D&C 130:8-9).

Finally, the white stone given to each inhabitant of celestial glory will be a Urim & Thummim “whereby things pertaining to a higher order of kingdoms will be made known” (D&C 130:10; see also Revelation 2:17).

Very well done and very thorough, Jeremy. Orson Pratt also indicated that Noah had a Urim and Thummim (Journal of Discourses, 16:50). And of course, the "seer stone" which Joseph had, apart from the Urim & Thummim, by which he translated much of the Book of Mormon, is another fascinating item.

Nice find, Ryan. I now recall reading articles indicating that Noah likely used the U&T to receive revelation regarding the ark and such. I guess I never saw that it was Orson Pratt that conceived of such an idea.

Regarding Joseph's seer stone(s), I invite you to read my previous post:

Scriptures are "Urims and Thummims." Using them, I have gained insights into the care of patients in my medical practice. Those keeping their covenant (D&C 20:77) will be greatly blessed in having truth and light to guide them in today's world of deception.

There is no longer a need for stones. There wasn't in Joseph Smith's day as well. Jesus promised us the Holy Spirit that will guide us unto all truth. When we abide in Him and He in us, we find that we are the temple of the Holy Ghost and interpretation of tongues is manifested by Him. Him alone. To be deceived and deceive others in this area is extremely dangerous.

Rob Sullivan, I am simply amazined at that comment of yours. Who are you to decide whether we need "stones" or not?

Do have any idea why there were originally 9 leaves on the temple apron?

Go do some research, find older and newer aprons and start paying attention how many leaves are on each one and THEN maybe that will be a BIG CLUE to you why we DO NEED "STONES".

I'm intrigued, Anon. Why were there 9 leaves on the apron originally? Any references?

Rob Sullivan, one might ask why John the Revelator spoke of holy beings in the future tense receiving white stones of revelation.

the urim and tummin is bestowed by god upon the foreheads of the children of the light so they can recieve his command directly.

This is a good link for anyone wondering about how the Book of Mormon was Translated with the Urim and Thummin.
http://lds.org/ensign/1977/09/by-the-gift-and-power-of-god?lang=eng#footnote32-03087_000_021

A good article has been written about seer stones and interpreters by
Steven D. Ricks.

these comments are sad...you all have no idea what they really were, Smith's lies still live cause you really don't let the Bible tell you what it means, you twist it to fit Smiths falsehood. Try reading Peters sermon in Early Acts, what can you all add to it?
NOTHING

I have very much enjoyed your thoughts Jeremy. Just a thought of mine...I wonder if we can truly say that the righteous spoken of in 4th Nephi had these stones simply based upon their righteousness. They were akin to those in the city of Enoch. They at least lived in a Zionistic state. Did they need them? I dunno. Just a thought. They may have. They may not have. Any other thoughts?

Also, I can't remember where I read this, but Joseph Smith said that eventually a prophet would become so in tune with the Spirit of the Lord, that they would no longer need to use the items provided by the Lord. That makes sense to me. Do you remember anything about him saying that?

I am LDS and hold the Melchizedek Priesthood. Just wanted to clarify that. These are just thoughts of mine. Wanting to know what ya thought.

To all of those of our friends who believe that this information cannot be correct, or that Joseph Smith could not be a prophet, I want you to know that I know that he was, and is as sure as I know that Peter was an apostle, or that Moses and Abraham and Adam and the rest were prophets. I know it in my heart through the prayers that I have prayed. Joseph Smith was simply a prophet of God, as were they. He was chosen by the Lord to usher in the restoration of His gospel. I believe this. I am aware that you may not, but I would invite each of you to ask the Lord if this be true for yourselves. I ask you, how do you know that there is a God? How do you know that Abraham or Noah, or Isaiah or John or Paul were real, and that they truly represented the Lord. How do you know that Jesus Christ is our Lord and Savior? Think about it. Pray about it. I believe that you do know these great prophets and apostles were who they say they were, and whom others testified they were. I testify they were, and also that Joseph Smith was, and Brigham Young was all the way down to our living prophet today, Thomas S. Monson. I say this with the love of my heart that the Lord has filled me with. I cannot deny it, and I know it as surely as I know that I exist or that our Father in Heaven and His son Jesus Christ our Lord are real. I know it through the Spirit which He sent. I just wanted to throw that out there as I felt the Spirit to do so, not because I am a Mormon who needs to bear allegiance to some guy named Joseph Smith, and that I am fooled so I must bear my testimony. All of the prophets and disciples bore the same witness as I do. As a follower and believer of Christ, I do that same thing. Mine is a simple testimony. Love ya.

My name is Christian by the way. Hehe. I am glad my mom and dad named me that. =)

How do I know which One is YES and Which one is NO? Is White Yes and Black No?

Read The Alchemist My Friend.