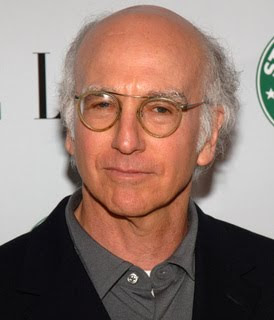 Larry David, probably best known for creating and producing "Seinfeld," also is the creator and producer of "Curb Your Enthusiasm," a show that airs on HBO. Although I haven't seen an episode myself, I hear that it's much like the Seinfeld series, except not rated for family audiences.

In his latest episode, however, he may have crossed the line regarding religion. As an article on Fox News reports, in the recent episode David's character "visits a bathroom in his assistant's home and splatters urine on a picture of Jesus. Instead of wiping it off, David leaves the restroom. Minutes later, David's assistant enters the bathroom and concludes that Jesus is crying. She then summons her mother to the bathroom, where both women kneel in prayer."

It amazes me to see what passes today as art or humor. There has to be a line somewhere, right?

Not surprisingly, this stunt has prompted outrage from numerous religious groups all decrying a blatant double standard when it comes to how the Christian religion is treated as opposed to other religions, for example Muslims. Opponents assert that quite a different reaction would have ensued had the religious context been an image of Muhammad, or the Quran.

On the other hand, proponents of the show remind the viewers that it is satire, and intended to entertain. Further, they assert, if you may be offended by such things…change the channel. Is it as easy as that? Just change the channel and nothing bad happens, right?

Are Christians the unofficial whipping boy of the liberal-thinking public? Is there really a double standard in religion in America? If so, why? Aren't we a predominantly Judeo Christian nation? Does a potential double-standard play into the Gospel teachings of being a "peculiar people"?
Posted by Jeremy at 10/28/2009 11 comments: 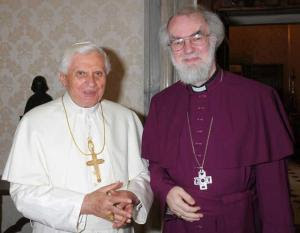 In light of the recent news that the Vatican has reached its hand out to the Anglican clergy, put off by liberal reforms in the Anglican church, by offering acceptance into the Catholic Church yet allowing them to retain Anglican traditions, I began to wonder what implications this would have.

The Anglicans and Catholics are not that different in their traditions. Following its break with the Vatican, the English church kept most of the liturgy and tradition that characterized the Catholic tradition. After 475 years of separation, there are some dogmatic differences, but the two are still very similar when compared to the direction other Protestant groups have taken. The one big exception that comes to mind, however, is celibacy of the clergy. As things currently stand, clergy in the Catholic tradition are celibate and Anglicans may marry, have families, and still serve their flocks.

How will the Vatican’s grafting in of these married priests affect its current priests who are still limited by vows of celibacy? I see a few potential points to mention:

The divide between the two clergies won’t survive for long. Young Catholic men who want to serve and yet would like to have families will enter the Anglican priesthood. There’s no way the Catholic orders would be happy about that.

It could cause a total repeal of Catholic celibacy as the Pope takes a more pragmatic line towards reconciliation with Anglicans, Orthodox, Arians, etc. over doctrine that your typical Catholic doesn't know or care about. (What?! You dare believe that the Trinity is homoousian and not homoiousian?!)

Maybe this backfires when conservative elements in the Vatican disagree. I remember when the Pope was selected that many liberals were disappointed that he was considered to be a hard liner, when it looks like he is much more pragmatic.

Update: The Economist has a nice article summing up some of the implications for Anglicans and Catholics. 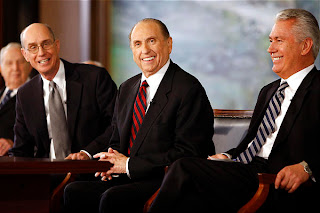 For the sake of those who don't know, an "octogenarian" is someone who is in their 80's. In Slate.com's annual "80 over 80" ranking, our beloved Prophet, Thomas S. Monson was ranked as the most powerful octogenarian in America, which also included those in their 90's and beyond. This is not surprising seeing as how he leads a Church with millions of faithful followers.

Other notables on this list, although I'm not sure why they are considered "powerful," were Joe Paterno at #25, Jack Kevorkian at #38, Betty White at #40, and Stan Lee at #45. Interestingly, Billy Graham was ranked at #78. Also, this may be one of the only times a Prophet of God would be associated with the likes of an adult magazine peddler - Hugh Hefner at #19.
Posted by Jeremy at 10/22/2009 4 comments:

Remember when General Conference was like a Soap Opera? 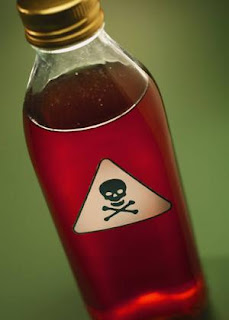 In the October session of General Conference in 1866, Brigham Young made these comments:

“To my certain knowledge, Emma Smith is one of the damnedest liars I know of on this earth; yet there is no good thing I would refuse to do for her, if she would only be a righteous woman; but she will continue in her wickedness. Not six months before the death of Joseph, he called his wife Emma into a secret council, and there he told her the truth, and called upon her to deny it if she could. He told her that the judgments of God would come upon her forthwith if she did not repent. He told her of the time she undertook to poison him, and he told her that she was a child of hell, and literally the most wicked woman on this earth, that there was not one more wicked than she. He told here where she got the poison, and how she put it in a cup of coffee; said he 'You got that poison from so and so, and I drank it, but you could not kill me.' When it entered his stomach he went to the door and threw it off. he spoke to her in that council in a very severe manner, and she never said one word in reply. I have witnesses of this scene all around, who can testify that I am now telling the truth. Twice she undertook to kill him. [Utah Historical Quarterly, vol. 48, Winter 1980, 82] (emphasis added)

If they had popcorn back then, the congregation was just shoveling it in. Can you imagine if one of the General Authorities spoke like that today?

Indeed, Brother Brigham and Emma had a colorful past. From what I understand, the issue between these two was Emma's adamant denial of Joseph's teaching of plural marriage. Brigham didn't take too kindly to anyone contradicting the Prophet; hence the outrage.

The FAIR Wiki does a great job of discussing their relationship in an article titled "Emma Smith and Brigham Young."
Posted by Jeremy at 10/03/2009 11 comments: