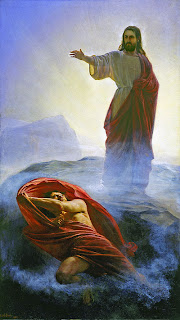 While serving a mission in Ecuador, I encountered a handful of experiences that confirmed to me the reality and power of Satan. At least one experience is so sacred (or frightening?) that I have yet to recount the event in its fullest, even to those closest to me. I find that when I dwell on those experiences, I can literally feel the Spirit drain out of me. Therefore, I try to avoid relating those experiences, especially to the youth who curiously seem to be interested in such stories.

However, there are a few recorded experiences not of mine that I typically will share with those of a curious disposition. One experience is documented in the Life of Heber C. Kimball, while Orson Hyde, Heber, and five other missionaries were in England proselytizing. One of the missionaries, Joseph Fielding, had a brother, Reverend James Fielding, who allowed them to preach in his church. However, after several individuals believed the missionaries’ testimonies and asked to be baptized, Reverend Fielding no longer allowed them to preach in his chapel.

Nevertheless, the missionaries decided to hold a baptismal service in a nearby river on July 30, 1837. Heber C. Kimball described that “by this time the adversary of souls began to rage, and he felt determined to destroy us before we had fully established the kingdom of God in that land, and the next morning I witnessed a scene of satanic power and influence which I shall never forget” (Orson F. Whitney, Life of Heber C. Kimball (Salt Lake City: Kimball Family, 1888), p.129)(emphasis added).

The night before the service, the missionaries were attacked by a host of evil spirits. Elder Kimball recounts the experience as follows:

“‘Sunday, July 30th (1837), about daybreak, Elder Isaac Russell (who had been appointed to preach on the obelisk in Preston Square, that day), who slept with Elder Richards in Wilfred Street, came up to the third story, where Elder Hyde and myself were sleeping, and called out, ‘Brother Kimball, I want you should get up and pray for me that I may be delivered from the evil spirits that are tormenting me to such a degree that I feel I cannot live long, unless I obtain relief.’

“‘I had been sleeping on the back of the bed. I immediately arose, slipped off the foot of the bed, and passed around to where he was. Elder Hyde threw his feet out, and sat up in the bed, and we laid hands on him, I being mouth, and prayed that the Lord would have mercy on him, and rebuked the devil.’

“‘While thus engaged, I was struck with great force by some invisible power, and fell senseless on the floor. The first thing I recollect was being supported by Elders Hyde and Richards, who were praying for me. . . . Elder Hyde and Richards then assisted me to get on the bed, but my agony was so great I could not endure it, and I arose, bowed my knees and prayed. I then arose and sat up on the bed, when a vision was opened to our minds, and we could distinctly see the evil spirits, who foamed and gnashed their teeth at us. We gazed upon them about an hour and a half (by Willard’s watch). We were not looking towards the window, but towards the wall. Space appeared before us, and we saw the devils coming in legions with their leaders, who came within a few feet of us. They came towards us like armies rushing to a battle. They appeared to be men of full stature, possessing every form and feature of men in the flesh, who were angry and desperate; and I shall never forget the vindictive malignity depicted on their countenances as they looked me in the eye; and any attempt to paint the scene which then presented itself, or portray their malice and enmity, would be vain. . . . I cannot even look back on the scene without feelings of horror; yet by it I learned the power of the adversary, his enmity against the servants of God, and got some understanding of the invisible world. We distinctly heard those spirits talk and express their wrath and hellish designs against us’” (Id. at 130-131)(emphasis added).

Orson Hyde subsequently described the events of that day in a letter to Heber C. Kimball:

“‘Every circumstance that occurred at that scene of devils is just as fresh in my recollection at this moment as it was at the moment of its occurrence, and will ever remain so. After you were overcome by them and had fallen, their awful rush upon me with knives, threats, imprecations and hellish grins, amply convinced me that they were no friends of mine. While you were apparently senseless and lifeless on the floor and upon the bed (after we had laid you there) I stood between you and the devils and fought them and contended with them face to face, until they began to diminish in number and to retreat from the room. The last imp that left turned around and apologized to me as he was going out and said, as if to apologize, and appease my determined opposition to them, “I never said anything against you!” I replied to him thus: “It matter not to me whether you have or not; you are a liar from the beginning! In the name of Jesus Christ, depart!” He immediately left, and the room was clear. That closed the scene of devils for that time’” (Id.)(emphasis added).

After returning from his mission, Heber C. Kimball inquired of the Prophet Joseph Smith as to the reason for the manifestation and, particularly, if there was anything wrong with him. The Prophet replied that “No, Brother Heber, at that time you were nigh unto the Lord; there was only a veil between you and Him, but you could not see Him. When I heard of it, it gave me great joy, for I then knew that the work of God had taken root in that land. It was this that caused the devil to make a struggle to kill you. The nearer a person approaches the Lord, a greater power will be manifested by the adversary to prevent the accomplishment of His purposes” (Id. at 131-132)(emphasis added).

One Elder I personally knew during my mission was once “possessed” by an evil spirit that was ultimately cast out by our mission President. At the inquisitive age of 20, I wondered how a seemingly righteous missionary could be susceptible to such a satanic manifestation. Indeed, I had encountered others similarly situated while tracting, but these individuals were typically living a lifestyle that would invite such an influence. The question I then asked was how Satan is able to possess the bodies of the righteous?

“We cannot tell and do not know how it is that evil spirits – few or many – gain entrance into the bodies of mortal men. We do know that all things are governed by law, and that Satan is precluded from taking possession of [and destroying] the bodies of the prophets and other righteous people. Were it not so, the work of God would be thwarted – always and in all instances – for Lucifer leads the armies of hell against all men, and more especially against those who are instrumental in furthering the Lord’s work.

“There must be circumstances of depression and sin and physical weakness that, within the restrictions of divine control, permit evil spirits to enter human bodies” (McConkie, Mortal Messiah, 2:282)(emphasis added).

I cannot be certain that the Elder I knew was personally righteous, but it has always perplexed me as to how this Elder found himself in that situation. That being said, am I also susceptible to such forces? Are we all possessed by Satan’s power to some extent until we become whole in the Savior? If this is the case, then, isn’t most of the world in that state? What are a few of the things that bring one under Satan’s power? And how does the priesthood of God fit into all this?
Posted by Jeremy at 5/31/2009

I always wonder what actions of mine are assisted with/by Satan's influence, and to what extent I may be under attack, so to speak. I think it best to always assume that I am my own worst enemy so as to not deflect responsibility for my actions. This forces me to expect a higher standard from myself.

That said, there have been times when I thought I was perceiving an attempt to take down a person spiritually from all angles. A loss of hope (despair) takes hold and then it seems like everything goes wrong--particularly the things that are most important to the person. It is common enough in people that should be objectively happy, that I wouldn't always attribute it to mere bad luck.

I think a PH blessing goes a long way in these circumstances. We see in scriptural examples, that once the thought of Christ takes hold everything can clear right up.

Jeremy, what Ecuadorian mission were you in, and what years? I was in Guayaquil in the mid 80's, before it split.

Valid comments, Nate. Moses describes Satan's influence as the chains of hell. I believe these chains hold each of us down, to some extent, until the point where we become "at-one" with Christ through the Atonement. I think in certain instances of our lives we completely break through those chains, and those are the times when "we have no more disposition to do evil," as King benjamin's people said.

I can personally testify that PH blessings come in quite handy in these situations. They are ever-important when you are dealing with unseen powers.

Bookslinger,I served in the Quito mission from 1996-1998. From reading your blog, I would have judged you as a bit younger. That said, I really respect the work that you do and your overwhelming missionary drive.

I find myself struggling every day to resist the promptings of our enemy. I think that we often will do something because of habits we have developed over years. Satan has had thousands of years of practice and I also think we would do well to resist by creating good habits to counteract his influence. For example, yesterday I was on the bus and had forgotten my scriptures and I felt something akin to withdrawel because I am developing the habit of reading on the bus everyday. God will help us if we will stay close to him in every way possible. Sorry to ramble but I was inspired by this post. Thank you all for your insight, it is a great strength to me in my life.

Lets see
Foaming from the Mouth and gnashing Teeth????
With knives from the spiritual Iron smith??????
Moving air with their Spiritual lips and speaking out loud?????

Anonymous is a fool. I however enjoyed your post and borrowed from the Heber C. Kimball account if that is ok. Go to TheMormonEagle.blogspot.com if you would like to see it. I apologize if it sounds to similar to your amazing post

Thank you for posting this account. I have been looking for it.